There is much to be said for travelling. I am not talking about a week in Phuket on daddy’s credit card, I mean really getting away from the everyday and immersing yourself in something completely foreign to what you know as your familiar existence at home. How many of us will, god willing years from now, lay on our deathbed and think; “You know what, I did it exactly how I wanted to do it”?

The decision to give up all that is familiar and the comforts of home for an extended amount of time in exchange for an open road, a heavy backpack, cramped flights and the odd case of exploding stomach syndrome is one that is not taken lightly. When I was 19 years old I first took it upon myself to make this decision. I had dreamt of travel, seeing new places and meeting new people for as long as I could remember and now that I was old enough, my number one priority was to get out there and see it all. Upon reflection, naivety worked in my favour. I made some terrible decisions along my travels at this tender age, but nothing that killed me. The freedom that I felt then and the feeling I still get now is like a drug. Every day of my life is spent thinking about my next hit.

I remember running up the stairs of a rundown guesthouse in Rajasthan in my first week in India, taking the steps three at a time, clinching in a way that can only be interpreted by onlookers as ‘that guy is about to shit himself’. The thought running through my head at that particular time was not one of freedom, it was one of anger at the fact that I had given up my hygienic, en-suite bathroom at home to travel to a place where the boundary between the toilet and the outside world seemed to blur. My mind was completely focussed on getting to the toilet in the room. So focussed in fact that I had forgotten to collect the key from the receptionist who was screaming wildly behind me to remind me that I wouldn’t be able to get in and alas, “there are no public toilets up there sir!”. Disaster struck. I will leave the rest of this story to your imagination.

While there are bad times, it is these times that makes you grow as a person. I feel like my sense of humour and my ability to constantly laugh at myself were formed and based much upon the happenings of these few years. I sure as hell know that it was times like these, when the world seemed to be against me and I was completely lost, that made me appreciate the good times just that little bit more.

I have so many great memories. The times in my life when I have had nothing to my name except a backpack full of dirty, torn clothes have been my happiest. Being in a state of pure happiness allows you to open up to people in a way that previously seemed impossible. I looked at the world around me with a new set of eyes. Eyes that were not clouded by the pressures of living and struggling to survive in the western world. I appreciated all the small things in life and in the world. It is possible that it was just simply the fact that I had the time on my hands to sit back, wait and look at something long enough until something happened, but it was a beautiful time.

If you have ever had the slightest inkling to get out there and see what this world has to offer outside of your office walls or the  cafe down the street, I implore you to take that first little step over the edge and just peek around the corner at what the rest of the world has to offer. Years from now, when your body is no longer up to the task of carrying a backpack or sleeping on an overnight bus, you will look back and smile. 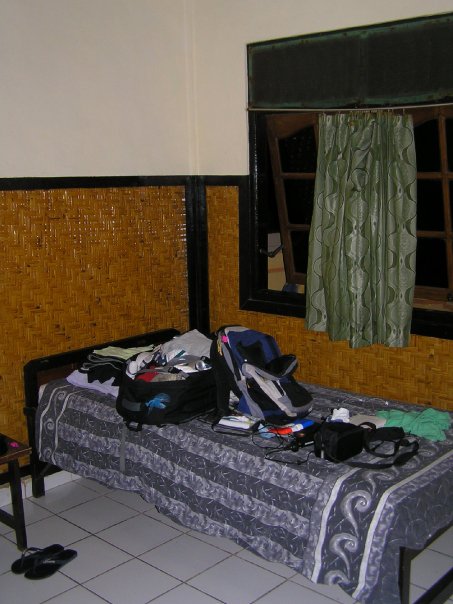 Nothing to my name except a bag full of dirty clothes.

Mostar with the missus.

2 thoughts on “Nothing to My Name, and Happy”