After an arduous journey from warm and sunny Sydney, some twenty-six hours later I find myself dressed in a heavy jacket, gloves and scarf, mounting a borrowed bicycle, ready to explore Amsterdam.

While there is no denying that thoughts of Europe in the summer are what usually form the basis of my everyday escapism, there is a lot to be said for visiting this part of the world in the colder months. This is my third trip to Europe outside of the traditional warm tourist season and there is a reason I keep coming back for more.

Within fifteen minutes of riding through Amsterdam, I feel lucky to have the streets mostly clear of the hordes of tourists that occupy them in the summer months. The party-like bus tours, full of drunken 20-somethings aren’t anywhere to be seen. Sure, there’s still the occasional person walking around getting in the way of cyclists and snapping photos but they do so with less urgency at this time of year.

I have met up with a Dutch friend who is only too keen to show me around his city. I met Edwin last year in South America and we’ve kept in touch with intentions to meet up and travel again in the future. Having organised a spare bicycle for me, Ed and I dump my bags at his apartment and set off into the city. Amsterdam and The Netherlands in general is flat, so riding a bicycle around the city is not only easy but a great way to interact with the locals and experience the city from an insider’s perspective.

With only 48 hours in Amsterdam, I’m eager to see as much as possible so we maintain a steady pace, stopping regularly so I can shoot some photos and to buy coffee or food to warm our hands. Cycling through the Vondelpark, an inner-city park surrounded by wealthy neighbourhoods, the true beauty of Europe in the autumn is apparent. The leaves are vibrant shades of yellow and orange and those that have not yet dropped from the trees cling delicately, prolonging the inevitability of the approaching winter.

Of course no visit to Amsterdam is complete without stopping to take in the beauty of the tree-lined canals and quirky houseboats tied to their banks. The canals branch off from the mighty Amstel River. Crossing one of the many bridges, it’s easy to envisage the Dutch fleet returning home from far-flung parts of the world with their ships full of exotic goods. Of all the canals, my favourite, and possibly the most beautiful, is the Brouwersgracht. Beside the ornate bridges and cobblestone roads, the canal is lined with warehouses built in the 1700s, many of which are now renovated homes.

I spend an hour or so visiting the Anne Frank house in the afternoon. I have been here before but my interest in revisiting was sparked after seeing a recent exhibition showcasing some of the letters in Sydney. Just as it was a few years ago, the experience is a somber reminder that this city wasn’t always the beautiful location in which I now find myself. 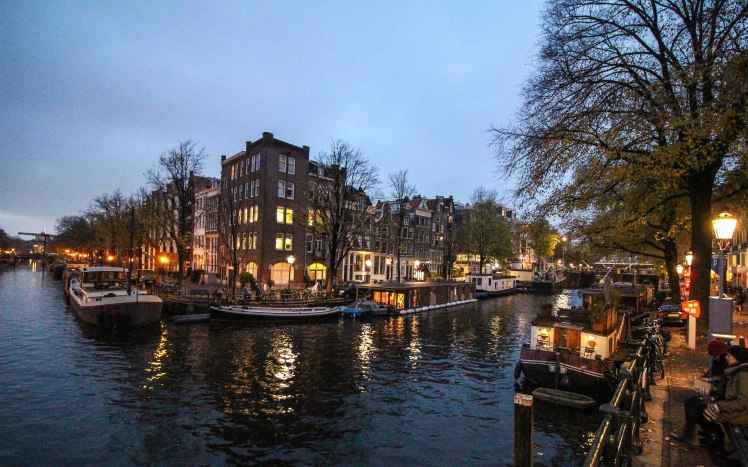 As the short days descend into darkness, people pack into lively bars for a beer, a cheese plate, a portion of fried salted cod or something a little more substantial to warm the belly. Despite the cold, bicycle is still our only mode of transport from one end of Amsterdam to the other. We spend the evenings hopping from traditional bars to more modern establishments. The mix of old and new is what draws me back to this part of the world. The traditions and romantic notions of Europe are what attract the heart, while the modern discoveries are what surprise me when I’m here.

We ride past the Stedelijk Museum (Museum Square) and the Van Gough museum, circle the Amstel Hotel and then stop in at a rooftop bar to order a cocktail before continuing on to the Melkweg concert venue to watch a Mura Masa gig. The following day is spent doing much the same as the first. At the end of the weekend, I find myself with a smile on my face and a sore backside from all the cycling.

This trip to Amsterdam has shown me that the city is more than coffee shops and a chance to stare through windows at prostitutes showcasing their wares. Amsterdam seems to be forever changing. It is proud of its past while at the same time takes pride in being at the forefront of innovation, trends and adapting to the everchanging state of the continent.